Arlin and Tammy Nusbaum have been happily married for 30 years and live in Modesto, CA. They were each raised by very active Mormon parents. Tammy was a second-generation Mormon, Arlin, a seventh before resigning from the Church in their early 30’s.

Tammy taught early morning seminary, and Arlin served a mission to Australia, plus other Church callings. They resigned from the Church due to the Church-wide curse of condemnation and the Church mandate to baptize all children for sins when they turn eight:

54 And your minds in times past have been darkened because of unbelief, and because you have treated lightly the things you have received—
55 Which vanity and unbelief have brought the whole church under condemnation.
56 And this condemnation resteth upon the children of Zion, even all.
57 And they shall remain under this condemnation until they repent and remember the new covenant, even the Book of Mormon and the former commandments which I have given them, not only to say, but to do according to that which I have written—(D&C 84)

For detailed information about the Church-wide curse see the page New Perspectives and his titles Five Errors of Mormonism and True Points of Doctrine. For in-depth background on Arlin’s Mormon background see The Mormon History, Writings, and Testimonies of Arlin E. Nusbaum (2019). 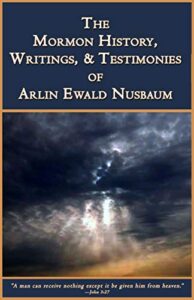